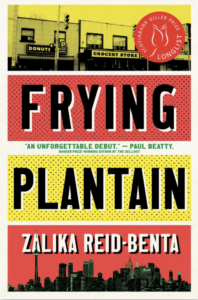 I spent my childhood in Toronto. My family lived in an apartment burrowed at the core of the city, overseeing the suburb hugging us on all sides, the labyrinth of sidewalks opening like arms outstretching and engulfing me. We skipped over the cracks in the concrete to the hum of the people. Under our feet, a pulse thudded, navigating each road, each crevice, parallel to each fence extending from the house to the backyard. I was in the second grade when I came to the conclusion that every person had a sound. Entering the homes of my friends, I could hear life embedded in the membrane of the house, the stories lining the walls of their mouths, the music of the dynamic voices hugging me on all sides, their musicality like arms outstretching and engulfing me. Again, the hum of the people.

Frying Plantain by Zalika Reid-Benta is an exciting read. Reading about Kara, her relationships, and the obstacles she faces ultimately morphed into an intense connection I feel between her world and mine. I read and Toronto comes alive. I read and I hear the voices of Eloise, her Nana, Anita, and Rochelle as those of my mothers, sisters, and friends. I read and Kara’s breath becomes my own. As a young, brown, woman I saw myself in Kara’s alienation and liminality. Although I will never quite understand her because our identities are markedly different, there are similarities that nurture my love for her and motivate me to seek similar texts that reflect the formation of similarly diverse identities through depicting experiences that I have never experienced. Frying Plantain is an invaluable text that exemplifies the importance of diversity and its celebration in literature to cultivate informed perspectives on the lives of people who may not look like us nor experience the same tribulations or milestones.

But what is diversity? What do we mean when we talk about diversity? Is diversity seeing yourself in the skin of another? Or is it when every individual that surrounds you has a profound impact on your approach to the world and your relationship to it? I think my answer to both would be yes. In its essence, diversity is the existence of the various, the dissimilar, or the beautiful many. Diversity refers to a vast range of varied backgrounds, cultures, and life experiences often representative in our ethnicities, sexual orientations, gender and sexual identities, physical appearances, religious identities, socio-economic statuses, and much more. [1]In knowing this, the very inhabitants of our communities are the embodiment of the importance of diversity in the media we consume. Every individual deserves to feel a sense of belonging in every space and environment they enter, and it is through diverse media and its celebration that we can foster a culture of inclusivity and acceptance for all the dimensions of identity that amalgamate into a person. However, we have historically failed to adequately recognize the kaleidoscope of identities in favour of stories that cater to the white, straight, cisgender male audience. A study by the Cooperative Children’s Book Center (CCBC) found that only 12% of texts sent to them in 2019 were about Black characters, paired with the low 13% for all 2019 books centering in on Black and indigenous people of colour.[2] Through celebrating diversity, we amplify these voices that have not been sufficiently represented. There’s so much we can learn from in diversity. Through portraying diversity, we have the power to combat institutionalized prejudice to microaggressions entrenched in our systems and the barriers that historically marginalized communities contend with every single day by educating others on experiences that are not their own, all the while empowering readers by mirroring their lives and representing their identities.

Well, then how do we paint diversity through literature? In 2017, 13-year-old Marley Dais organized a campaign named “#1000BlackGirlBooks,” advocating for increased representation of black girls in fiction. When discussing a film coming out at the time, Dais expresses, “[i]t is so nice to see that the Black girl is the main character, and not the sidekick. This movie, like the Black girl books I collect, will serve as a mirror for Black girls and as a window to other young girls to see what they can do.”[3] In this, Dais distinguishes between the Black female character as a sidekick as opposed to being the protagonist. What’s the difference? The Black, female character as a protagonist incorporates her experiences at the forefront of the text and illuminates a perspective on the world influenced by her identity. This is diversity because this portrayal highlights a story that has not been sufficiently told and amplifies a voice that has not been given as much power as others. For your own reading, I encourage all of you to visit Dais’ database for novels with Black female protagonists here. In Frying Plantain, Zalika Reid-Benta masterfully harnesses her voice to convey experiences from the perspective of a young, Jamaican woman traversing Toronto.

Reid-Benta grounds her narrative in Little Jamaica, a racialized, cultural enclave nestled and afloat in the sea of Toronto landscape on Eglington West. The exploration of Kara’s Jamaican heritage interacting with her Canadian identity in this space relies on the resilience of culture brought by diaspora that has adapted to the Canadian city, which Reid-Benta describes using rich imagery. Like this, she roots Kara’s stories in the Jamaica community by repeatedly referencing known locations and street names from Vaughan Road Academy to Marlee Avenue, skipping from New Orleans Donuts to Collinson Boulevard, to ultimately reflecting the true individuality of Kara’s story. Simply in setting the story in Little Jamaica, Reid-Benta surrounds us with Jamaican influence and culture. There, I feel the community around me, and I am excited by the tremendous amounts of stories told from racialized voices, manifested as Kara, Eloise, Nana, Rochelle, and Anita. Each voice is unique and intersectional, and Reid-Benta masterfully incorporates the Jamaican vernacular in her portrayal of cultural identity and the community in Little Jamaica. With this balance between Jamaican and Canadian identity, readers see Kara’s liminality as she attempts to reconcile both of these elements inside of her. She epitomizes this theme of balancing two identities that pervades the entire novel in her first chapter, “Pighead”. There, Kara struggles with the division between two homes – her family home in Jamaica, where she feels othered because she was scared of the severed head, and her home in Toronto where she masks the truth by weaving complex stories of how she had killed the pig or how she had stood in front of it without any fear or remorse. Here, Kara is performing a balancing act that she performs again with Rochelle’s party juxtaposing Andrei’s, again between her Nana and her mother’s intergenerational differences,[4] again between her fighting grandparents, again between the wishes of her mother and her friend group and more. It is as if she is suspended on tightrope where she must center herself on the razor edge dividing two aspects of her identity. Like this, we see Kara as she navigates predominately white spaces, shown by the racist and ignorant comments Andrei and Hannah make at Andrei’s party and Mr. K’s selectively unwelcoming behaviour, everyone at her new school expecting her to be with Terrence, the only other Black student, and the lack of any shade of foundation that really matches her skin tone. And with that, we see Kara’s intersectionality in her identity as a woman when she is forced to adhere to rules on her appearance in ‘Inspection’, where the narrator describes ashy elbows, unkempt hair, her body, and catcalling boys, which is when Kara remembers that “[a]ccording to [her friends], this was what it was to be a woman. Reid-Benta states that, “What I wanted to do was write a conversation about two black girls talking about how they can’t go in the snow because it would ruin their hair. I wanted that on the page because I hadn’t read anything like that when I was growing up.”[5] We see Rochelle’s unhappiness when hair becomes untangled snow because of her curls.  “” In all of this, we witness Kara’s struggle as she grows and we learn from her experiences what it is like for her, and possibly those similar to her, to grow up as a young, Black woman in Toronto.

As I have grown over the years, when I reminisce on my childhood in Toronto, although it might increasingly feel like remnants of a dream I cannot recall, I remember the hum of the people. When I say this, I mean I remember how the symphony of overlapping languages, stories, and voices used to echo in the air around me. If you listened close enough, a dull, eternal beat similar to the opening and closing chambers of a beating heart. The diversity in everyone around me. I felt connected to people because so many of them looked like me and yet so many of them did not, and I loved them all so much.

[2] “Data on Books by and about Black, Indigenous and People of Color Published for Children and Teens Compiled by the Cooperative Children’s Book Center, School of Education, University of Wisconsin-Madison.” Cooperative Children’s Book Center, 2019, ccbc.education.wisc.edu/literature-resources/ccbc-diversity-statistics/books-by-and-or-about-poc-2018/.

[4] Taylor, Sharine. “Searching for Identity in the Diaspora as an Afro-Caribbean.” Medium, ZORA, 26 July 2019, zora.medium.com/searching-for-identity-in-the-diaspora-as-an-afro-caribbean-23298ac49ec2.

Find out more about the Diversity and Inclusion Book Club here.